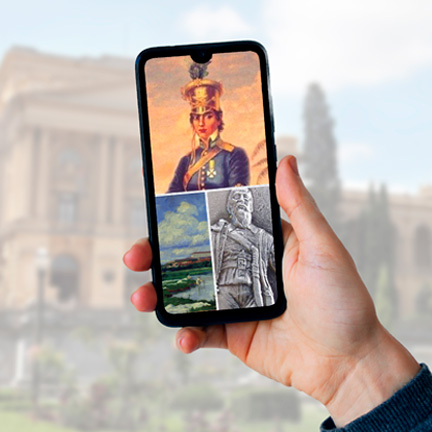 Museu do Ipiranga is specialized in the history of Brazilian society, with an emphasis on material culture. Its collection has some 30,000 items of iconography, including paintings, photographs, and posters, in addition to 25,000 objects.

In the collection, it is possible to get to know the imaginary about the Brazilian and São Paulo past through paintings such as “Desembarque de Pedro Álvares Cabral em Porto Seguro” (1900) and “Fundação da Cidade de São Paulo” (1909), by Oscar Pereira da Silva; “Fundação de São Vicente” (1900) by Benedito Calixto and “Partida da Monção” (1897), by Almeida Júnior, besides the plaster model that represents the city in 1841.

Another highlight is the Militão Augusto de Azevedo Collection, a 19th century photographer known for his urban photographic records, such as the “Álbum Comparativo da Cidade de São Paulo 1862-1887”, and for the countless portraits of people made for the Photographia Americana studio.

A new database is under development and will soon be released.