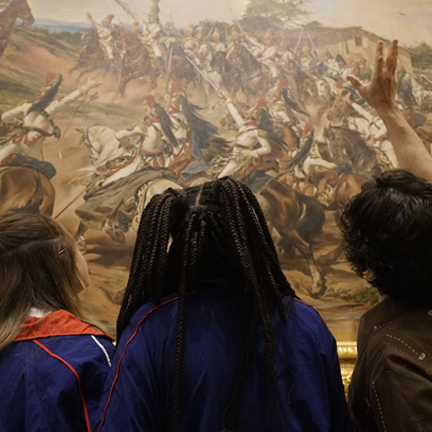 January 25 to March 26, 2023
Venue: Temporary Exhibition Room (Garden Floor)
Tuesdays to Sundays, from 11am to 5pm.
Free entrance, with ticket distribution on site (valid only for this exhibition).

For most people, thinking about Brazil’s Independence means imagining the cry of D. Pedro I, on the banks of the Ipiranga creek. But did you know that our history is marked by several events that were fundamental for the independence?

To bring such facts to light, the Ipiranga Museum presents the exhibition “Memories of Independence“.

The exhibit focuses on the memories of “other independences”, related to separation movements that took place in the Northeast and in Rio Grande do Sul during the 19th century.

It also addresses several practices of commemoration of the creation of the Brazilian state, held since the 1820s, in different cities such as São Paulo, Rio de Janeiro and Salvador, until its bicentennial in 2022.

The exhibition "Memories of Independence" inaugurates the Museum’s new space for temporary exhibitions, with 900 m2, air conditioning and wide accessibility. 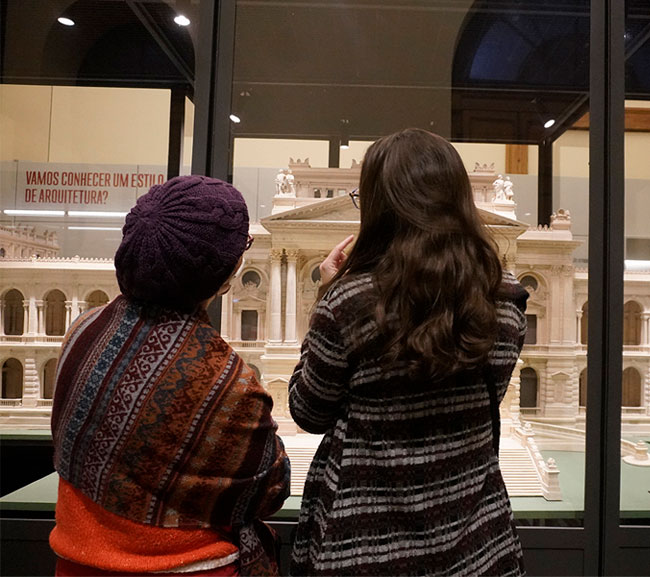 This exhibition addresses two main themes: the construction of the Monument Building and the transformations of the museum's collection throughout its history.
When the Museum was created, it had collections of botany, zoology, ethnology, and mineralogy artifacts. Throughout the years, these collections have been transferred to other institutions. A part of the art collection was also given to the Pinacoteca do Estado de São Paulo Museum. The objective of these transformations was to make Museu do Ipiranga a specialized history museum. Besides all these changes, you can also see the scale model that shows how the building was originally designed. And through an immersive experience you will also discover what material culture is and how researchers study societies through objects and images. 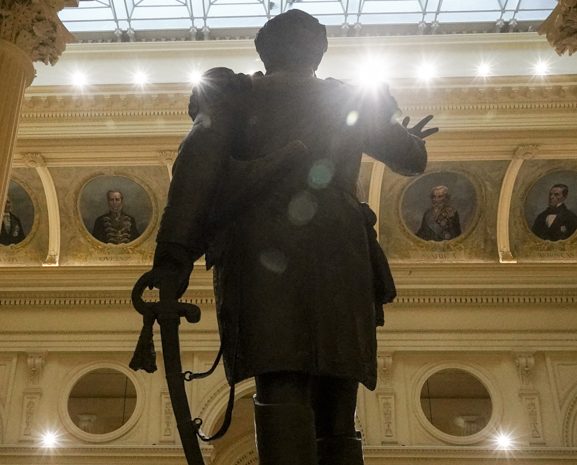 A History of Brazil

To visit this exhibition, it is necessary to go through three different areas of the Museum: the Lobby, the Staircase, and the Great Hall. These areas were decorated with sculptures and paintings that depict a version of Brazil's formation. The works represent explorers called "bandeirantes" and characters from the early Portuguese colonization, as well as characters and events linked to Independence. There are also vases with water from Brazilian rivers and the painting "Independência ou morte!" (Independence or Death!), by Pedro Americo, on display.
This area of the museum is protected by heritage preservation agencies, which means that it must maintain its original characteristics. For this reason, the room remains with the same presentation as the time when the last paintings were installed, in the 1960s. But this does not prevent it from being discussed and interpreted from new perspectives, which are presented in this exhibition. 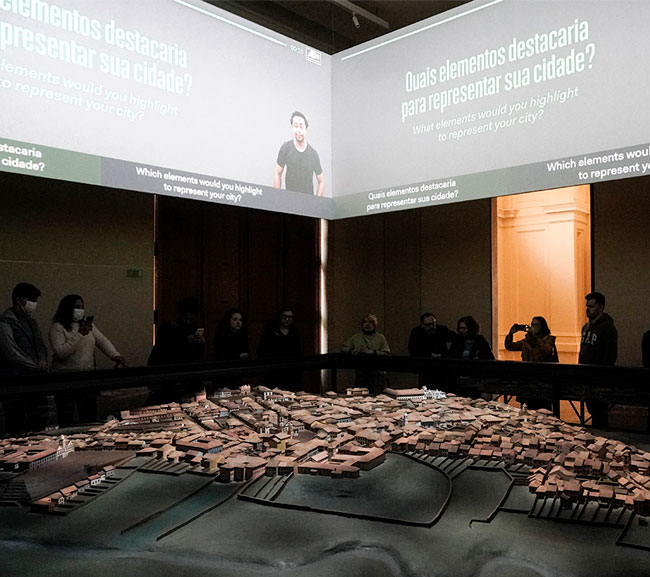 In this exhibition, it is possible to see paintings that represent scenes and characters from Brazil's past. They are very familiar images, and you have probably seen some of them in schoolbooks or other everyday objects. These representations were made from elitist visions, which depreciated the presence of indigenous and black people in Brazil's past.
Here you will also find a maquette and paintings that represent the city of São Paulo about 150 years ago. 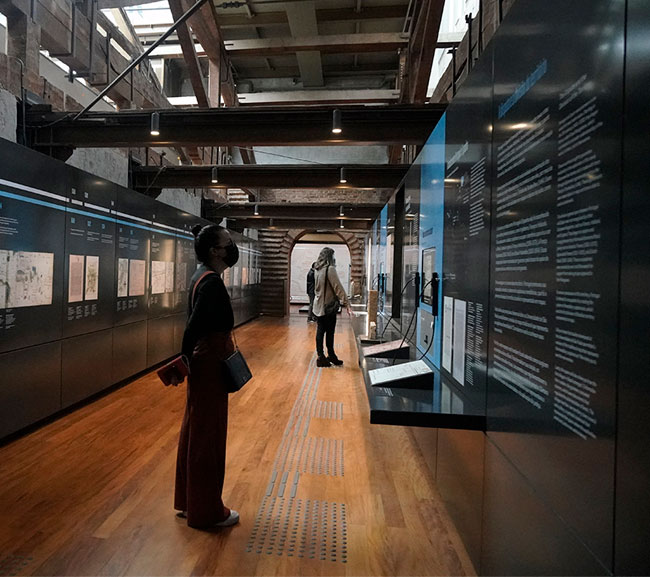 This exhibition focuses on the formation of the Brazilian territory and the conflicts between the Portuguese, the natives, the Spanish, the French, and the Dutch during the colonization process.
Here you can find maps, instruments used for navigation, and stone objects that were used in this process of occupation and territorial division.
These objects and images clearly show the invasion of territories, the destruction of villages, the deaths and enslavement of indigenous populations.
The exhibition is enhanced by several videos, showing different points of view on colonization. 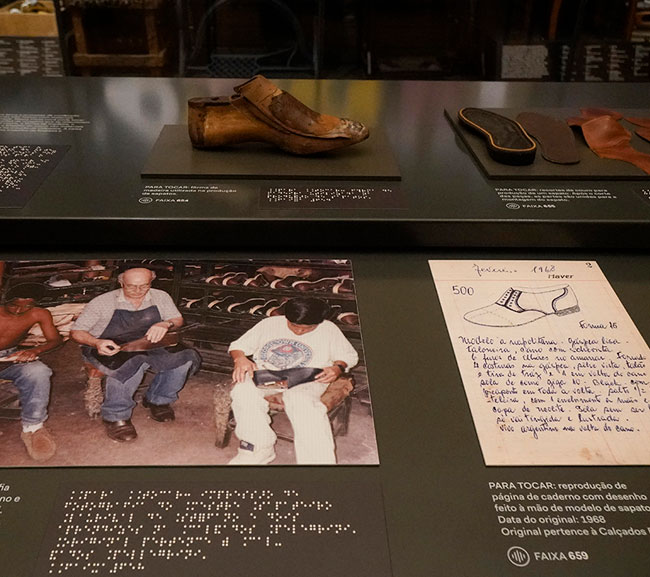 It presents the performance of workers in different activities and periods of Brazilian history.
Here, you will find images of work registration, instruments used in public construction, such as roads and railroads. Tools and other objects related to work in the fields are also on display.
The exhibition shows that all work involves planning, technique, and creation, employing both physical and intellectual effort. 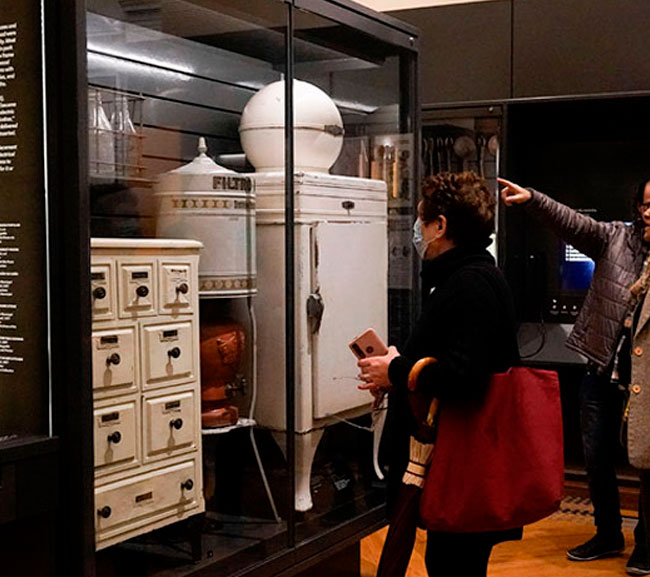 This exhibition is about how the domestic space is a place of formation of our way of being. It presents working and decorative objects from different São Paulo households over the last 150 years, such as crockery, kitchen utensils, and office objects. From them, we are suggested to reflect about their uses, ornaments, and materials.
By looking at how objects relate to each other and to the people who use them, we can understand how they have helped in the construction of individual and social identities based on gender differences. 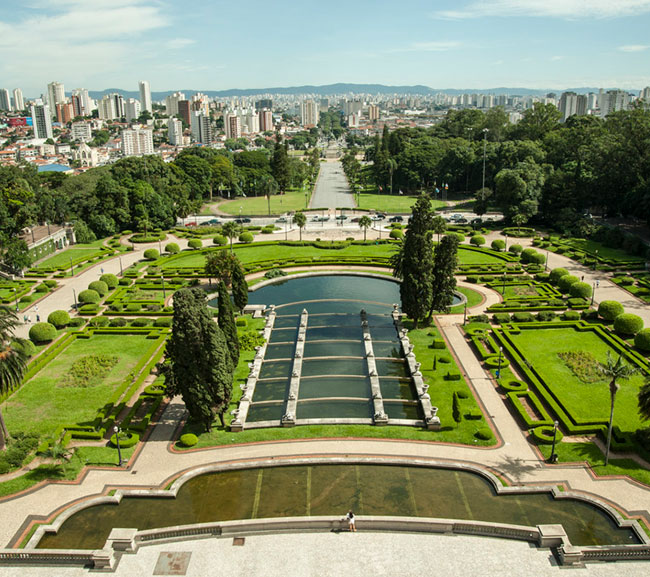 The City Seen from Above

In this exhibition you will find aerial photographs of the Ipiranga district, which show the region around the Museum at different moments in its history.
These images were captured from different sources, such as the top of the Monument Building, airplanes and drones. 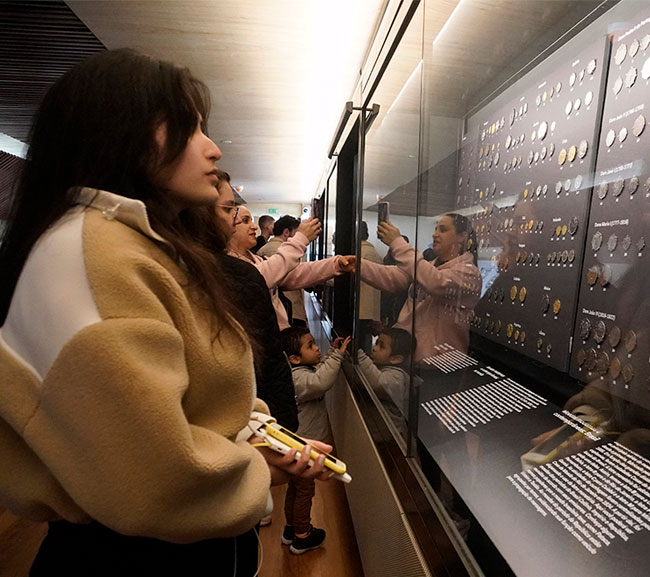 It presents the second stage of the curatorial cycle: Listing. You will discover how objects are described and documented from the traditional collection of coins and medals, that has very established ways of identifying and describing their materials and their symbologies. 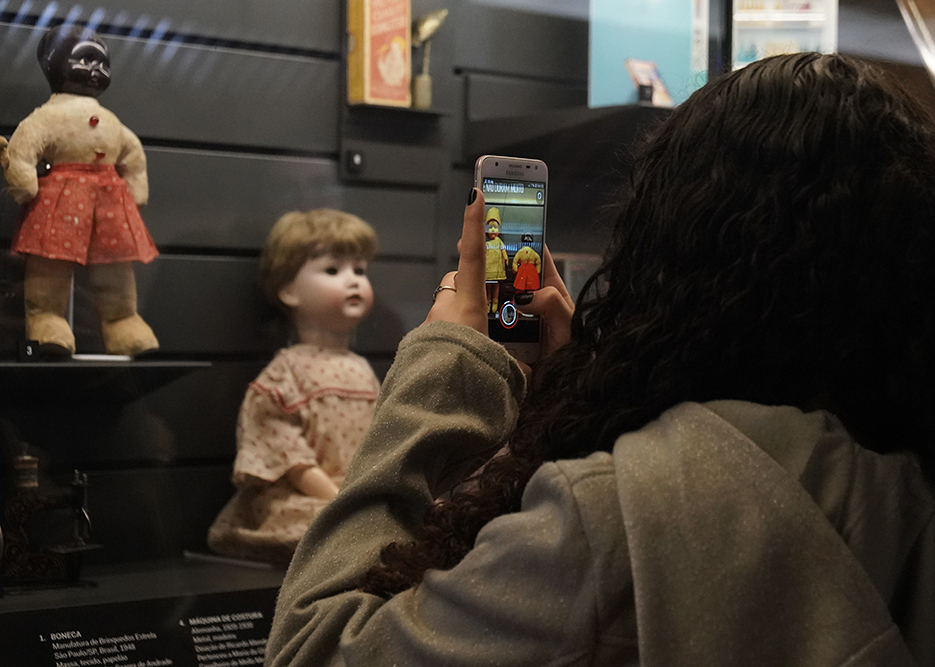 It shows how the work of conserving a collection is done. There are hundreds of play house objects alongside cars, spaceships, and rockets. Here it is possible to show the conservation work from the initial evaluation when the item enters the collection, the hygienization and restoration activities, the ways of packaging, and the storage in the technical reserves. 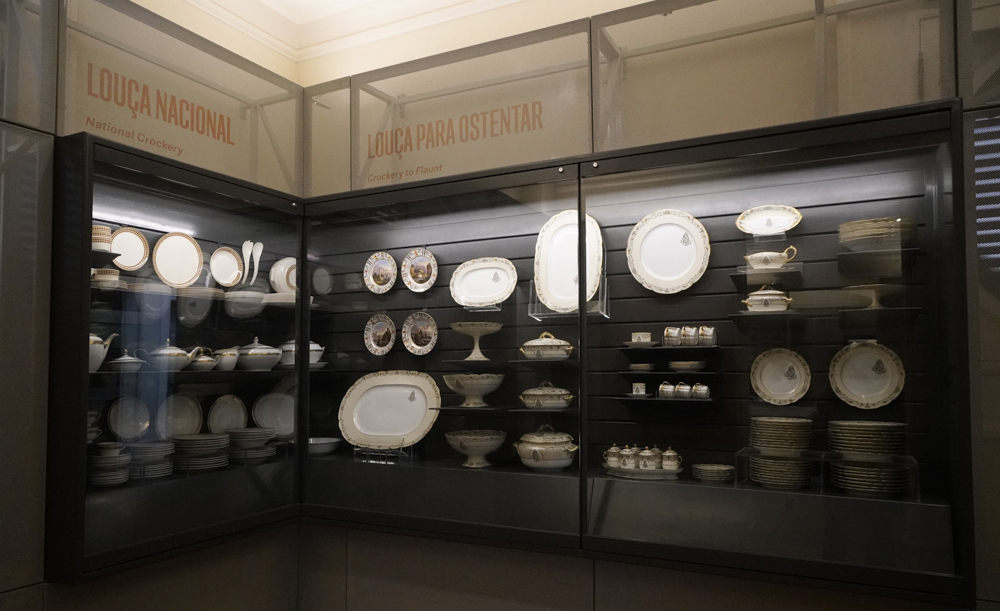 The last stage of the curatorial cycle is communication. Using our collections of tableware, it will be possible to show how an exhibition is produced, a process quite different from the practice of simply displaying the objects. The exhibition is related to selection, creation and interpretation, that is, a process of knowledge that is far from being neutral or certifying a truth. 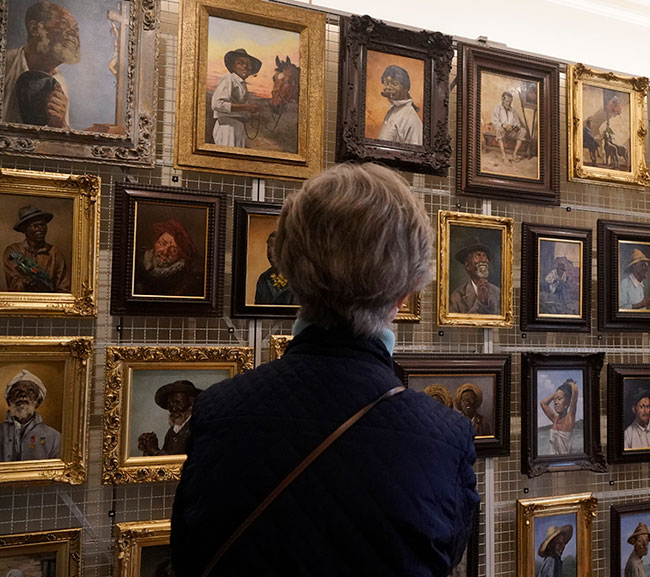 There are four exhibitions dedicated to presenting the work of professionals from different areas working at the Museum. These actions are called the curatorial cycle. This exhibition explores the first stage of the cycle: collecting. We use samples from our collections to explain the changes in document collection policies, which have led to both a expansion of the range of social segments represented and a variety of materials and techniques.