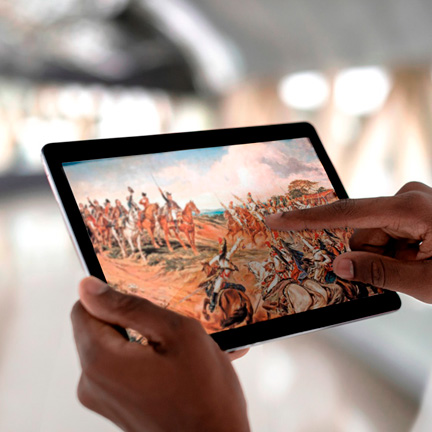 Museu do Ipiranga is on

The Museu do Ipiranga has been online since 1999, when its first site was launched on the Internet. Currently, it has a variety of web pages, applications and content, including profiles on social media such as Facebook, Twitter, Youtube, LinkedIn e o Instagram, as well as controls for interaction with the collection, remixes and sharing. In 2011, the Institution published its first online repository of images from its collection, with open access to all audiences. This gallery was enabled by the computerization and digitalization process that began in the 1990s, which established the electronic management of the collection and intensified the museum’s approach to digital culture.

In 2017, the Museum committed itself to work in the next generation of digital research by joining the Museu Paulista’s Wikipedia Initiative, in partnership with the Wiki Movimento Brasil User Group. Among other actions related to Wikimedia projects, the team was responsible for updating the Museum’s Wikipedia entry and the Museu Paulista’s GLAM project. The process included the development of a digital book and six curatorial interactive applications, with the purpose of expanding access to the Museum’s collection. As for the use of the Tainacan plugin, it allowed the migration of the collection to the site and the creation of digital repositories, interactive exhibits, and educational products.

Since 2020, several modules of the 3D virtual environment were developed, which allows a virtual visit to the monument building and its garden, as well as to the exhibition rooms and the interaction with the collection digitally drawn. The app Museu do Ipiranga Virtual Museum also introduced the museum into the gaming universe, with the videogame M.I.D.- Museu do Ipiranga em Defesa! and puzzle mini-games, as a result of the project “Gamers of Ipiranga”. The Museum has also developed a 360º virtual tour resource to the historical building of its associated unit, the Museu Republicano de Itu, and is on the Google Arts & Culture website, which offers virtual visits to important institutions in several countries.

The engagement of the Museum’s teams, partners and sponsors in the construction of its digital presence has promoted advances, research, products and materials based on the most diverse digital media, allowing the consolidation of the institution’s digital culture and a huge repertory, with special emphasis on the podcast Ecos do Ipiranga, that in its first season has achieved great success in auditions.

Subscribe to the Newsletter to be informed about the Museum activities.